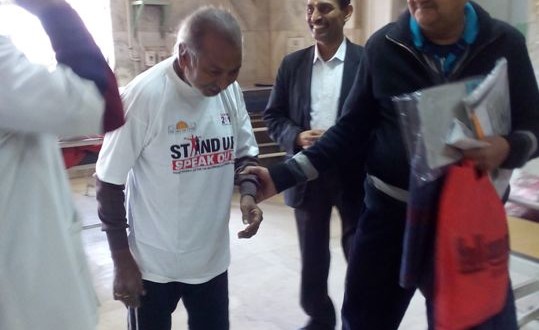 After a month of struggle and effort paid by MUN society, Jayprakash (known as Billoo) discharged from MDM hospital and sent to “Anubandh”. Earlier billoo was admitted to MDMH on 20th Dec 2015 and after treatment he got recovered. But there was no further arrangement done by officials so he was just a part of trauma center at MDMH. MUN society and Rajasthan Patrika (publish news on 15 Jan) put their all efforts to release him from hospital and provide his a place where he can be taken care and get a proper shelter. Than all official came into action and issued letter to seniors for rehabilitation of billoo.

In this further Yogesh ji discharge him from MDMH and taken him to Anubandh vradhashram. Ms Anuradha Advani incharge of Anubandh assured about his proper arrangement and care.